Listen to the full episode on NSPR Fridays from 1 to 2 p.m.

The trio of soprano Ann Moss, Justin Ouellet on violin and guitar, and pianist Jennifer Reason present an eclectic program spanning from Grieg to Ricky Ian Gordon (of Met Opera fame) to Ouellet’s own music. The program is full of vignettes of the pandemic from the artist’s perspective: what challenged us, what inspired us, what we lost and what we learned and what we will take forward into an uncertain future, with a sense of hope.

In the words of Ann Moss:

The program is full of vignettes of the pandemic from the artist’s perspective: what challenged us, what inspired us, what we lost and what we learned- and what we will take forward into an uncertain future, with a sense of hope.

We begin our program with a treasured favorite from Stephen Sondheim. This song was originally part of a TV musical called Evening Primrose, the plot of which centers on a poet who takes refuge in a department store after closing. He discovers a secret community of people who have been living inside the store for many many years (unable to leave due to a somewhat Twilight-Zone plot element). In this song, a young woman who hasn't been outside since she was a little girl recounts visions of a world she only vaguely remembers. We couldn't think of a better song to encapsulate how quarantine felt for so many of us.

We want to present this song as an offering of sorts, to all of our musician friends who have lost their income due to COVID-19. We send it out especially to those who have been asked to continue performing for reduced fees, or in some cases for no remuneration at all. The arts have helped so many navigate this difficult time. We feel it is absolutely crucial that we lift up and financially support our artists, now more than ever.

Heather Gilligan is a marvelous composer Ann met during graduate school in Cambridge, MA. The cycle this song appears in was composed on poems by their mutual friend and poet Lisa DeSiro, who was also a graduate of their MM program as a collaborative pianist. DeSiro's poignant poem and Gilligan's somewhat frenetic setting perfectly illustrate the psychological challenges of extended solitude.

For Justin, quarantine brought on a deep desire for practice. He spent the first five months of the Pandemic woodshedding a ton of solo violin and viola music, sometimes for hours a day. "It was a way for him to process his stress," says Ann. "During that time we were living in a pod with a young man from Norway who rented a room in the main house on our rental property. We had the chance to celebrate Norway Day with him in May 2020, learning how to make and decorate the traditional kransekake (it's gluten free and delicious!!)" Justin wanted to dedicate this gorgeous movement to our Norwegian friend Patrick. Apparently this violin sonata was criticized by Grieg's teacher for being "too Norwegian" - Grieg's response was to make his following violin sonata "even more Norwegian."

This piece is originally a collaboration for solo violin and Flamenco dancer. Justin teamed up this past winter, over FaceTime, with the fabulous Marina Elana to conceive and compose this work. It explores the anxiety and desperation experienced by collaborative artists who were suddenly and completely cut off from their communities. Finding one another in the digital realm, creativity slowly re-emerged and, in the end, collaboration found a new way to thrive.

The Bustle in a House

I'm Nobody! Who Are You?

Will There Really Be a Morning?

Too Few the Mornings Be by Ricky Ian Gordon was the original impetus for Ann and Jennifer's 2021 collaboration, giving subsequent rise to this CapRadio program. Ann had initially planned to perform the cycle with Ricky Ian Gordan at the piano, during a teaching residency at San Diego State University that was to have taken place in April, 2020. Needless to say, that residency was postponed and eventually took place online in February, 2021. For the virtual culmination, Ann and Jennifer prepared a filmed performance of the song cycle, which Gordon composed on Emily Dickinson poems. The four selections we include on today's program feature themes of impermanence, self-doubt, waiting, and wondering about the future. To close the set we include an earlier Gordon song, composed on his own poem. Once I Was considers the ways we change as we age, and how music can serve as a continuum and a place of refuge.

Finally, we close today's program with a beloved song from a poet-composer to whom Ann has dedicated many years of performing, arranging and recording. Joni Mitchell's Both Sides Now has been a musical touchstone for Ann and Justin throughout the COVID-19 Pandemic. They have played it many times over the past 16 months, in driveway and sidewalk concerts up and down The Bay, and over Zoom for friends and family. Justin plays their arrangement today on Ann's father's acoustic guitar, a Gibson Folksinger from the early 1970s. 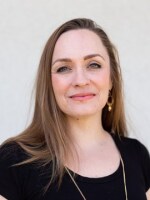 Jennifer Reason
Jennifer has been a classical host at CapRadio for several years now, but she’s been talking about music long before that! A musical alum of Sac State, Jennifer is an avid performer in the community and host of many artistic events in the area. You may have seen her in her role as Artistic Director of vocal ensemble RSVP, Music Director and pianist for the Rogue Music Project (along with morning classical host Kevin Doherty!), or as pianist and founding member of Citywater, modern instrumental sextet currently Ensemble-in-Residence at CSUS (www.citywatermusic.com).
See stories by Jennifer Reason
CapRadio
See stories by CapRadio
Monitor Wildfires Burning Throughout The North State
Monitor the fires burning in our area. This article will be updated with the latest information on fires burning throughout the North State.
Local Weather
More Weather
Blue Dot, named after Carl Sagan's famous speech about our place in the universe, features interviews with guests from all over the regional, national and worldwide scientific communities.
Learn More