Our translator in Hayfork is off air because of weather and utility problems. We appreciate your patience as we look for a solution.
Environment
In A North State Garden
In a North State Garden celebrates and promotes the art, craft and science of home gardening in Northern California. Part of NSPR's From the Ground Up series, this program is hosted by Jennifer Jewell and airs Saturdays at 7:34 a.m. and Sundays at 8:34 a.m. PST.

In A North State Garden: Lizards And Friends

Each evening when I get home from work, I water my front, south-facing garden — a dry, rocky landscape which is cooked by the sun most of the day.

The south-side lizard likes to hunt under the deer grass and manzanita and bask on a large, round gray rock.

The north-side lizard likes to hunt along the wall and in and behind the overgrown foliage of a tall, potted shrub rose. It basks in the sun along the wall's stone cap.

In my mind, one of these lizards is male — this one does a lot of posturing and pushups when I come by — and the other is female; this one is smaller and a little less showy. If and when they meet in the middle of the wall, they are very discreet about it.

In my tiny garden in progress, there are at least three reliably territorial and engaging western fence lizards. In doing what they do as lizards — eat insects, bask in the sun and sleep — they make my life and garden more pleasant for me as a result of lower populations of insects that I'm not crazy about in close quarters, like mosquitoes and grasshoppers. While also eating insects I might like, in this the lizards are maintaining their part in an overall balance on this little piece of land.

I learned more about my lucky garden's lounge of lizards in “Amphibians and Reptiles of Bidwell Park” by Jackson Shedd.

Officially Scleroporus occidentalis occidentalis, some of these lizards' characteristics are apparent in their more common names of blue belly, spiny or swift lizards. The blue marking on their undersides are larger and particularly noticeable in males who flash these colors to intimidate other males or impress females. The blue is kept hidden for the most part from predators such as birds of prey and outdoor housecats, which can decimate their populations.

The slight lizards do love to bask and thereby thermo-regulate, especially on heights such as fenceposts, as evidenced in slower-moving and fewer appearances in my garden by the end of October. The lizards slow down and are dormant in winter, going into full hibernation in some areas. They mate in spring and the female lays one to three clutches of three to 15 eggs each year.

Two remarkable adaptations of the western fence lizard include their caudal autotomy, the ability to shed their tail when being attacked. The left-behind tail then reflexively wiggles around on the ground, thereby distracting the predator while the lizard gets away. Finally and perhaps coolest of all in terms of benefits to us of these friends in the garden, western fence lizards blood includes a substance that kills Borrelia burgdorferi, the bacterium the causes Lyme disease in ticks, significantly reducing the incidence of Lyme disease in areas with healthy, western fence lizard populations. I might spend a lot of time as the only human in my garden, but I am never alone there. As Aldo Leopold noted in his 1949 “A Sand County Almanac,” "When we see land as a community to which we belong, we may begin to take part in it with greater love and respect."

Tags
Environment In a North State GardenFrom the Ground Up 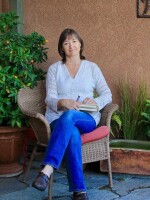 Jennifer Jewell
Jennifer Jewell is the creator and host of the national award-winning, weekly public radio program and podcast, Cultivating Place: Conversations on Natural History & the Human Impulse to Garden, Jennifer Jewell is a gardener, garden writer, and gardening educator and advocate. Particularly interested in the intersections between gardens, the native plant environments around them, and human culture, she is the daughter of garden and floral designing mother and a wildlife biologist father.
See stories by Jennifer Jewell
Local Weather
More Weather
NSPR Headlines
Headlines is published every weekday by 8:30 a.m. Subscribe on Spotify, Apple Podcasts, Google Podcasts, and NPR One.
Blue Dot, named after Carl Sagan's famous speech about our place in the universe, features interviews with guests from all over the regional, national and worldwide scientific communities.
Learn More
On Cultivating Place, we speak with people passionate about plants, gardens, and natural history. We explore what gardens mean to us and how they speak to us.
Learn More
Each week host Nancy Wiegman talks to local, regional and national writers about their latest projects.
Learn More
Related Content