United States Forest Service officials have opened a criminal investigation into the cause of the Mosquito Fire, according to a new filing by Pacific Gas and Electric (PG&E).

In a report to the Security and Exchange Commission on Saturday, PG&E officials also said that federal investigators seized utility-owned infrastructure — a transmission line and its attached equipment — located near the OxBow Reservoir in Placer County, where the fire started.

“An initial assessment that the fire started in the area of the Utility’s power line on National Forest System lands and that the [US Forest Service] is performing a criminal investigation into the 2022 Mosquito fire,” the report said.

The Mosquito Fire started on Sept. 6 and has burned through more than 76,781 acres across both Placer and El Dorado Counties. It is 85% contained, as of Monday morning.

Within days of starting, the fire eclipsed 10,000 acres and forced law enforcement officials to issue evacuation orders, temporarily displacing more than 19,000 people. Damage assessment reports say at least 78 buildings have been destroyed in both counties.

Cal Fire and the U.S. Forest Service have not yet determined the cause of the Mosquito Fire. PG&E spokesperson Lynsey Paulo said the utility is conducting its own investigation into the cause of the fire.

On Sept. 8, PG&E officials filed a report to the California Public Utilities Commission indicating that a transmission pole near the OxBow Reservoir had been wrapped in caution tape by Forest Service officials. The report said that PG&E employees had “observed no damage or abnormal conditions to the pole,” but noted that the transmission line was energized at the time the fire was started.

Last week, a civil lawsuit was filed against PG&E on behalf of Placer and El Dorado County residents affected by the fire.

PG&E equipment has started a number of major California wildfires, including last year's Dixie Fire, the second largest fire in state history. The company also pleaded guilty to 85 counts of involuntary manslaughter after starting the Camp Fire in 2018, the deadliest and most destructive wildfire in state history.

The utility filed for Chapter 11 bankruptcy protection in 2019 after a flood of lawsuits and wildfire liability claims. 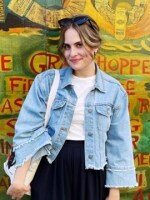 Claire Morgan
Claire Morgan is CapRadio’s Digital Editor.
See stories by Claire Morgan
Giving Tuesday reminds us to take a moment to think about what we’re grateful for, like family, a good meal, or a well-told story. Donate to North State Public Radio.